Craigvar is a distinctive house offering luxury accommodation and wonderful food in the centre of Strathpeffer, an outstanding conservation village in the Highlands of Scotland. It was built in 1839 and has been offering hospitality more or less continuously ever since. Resident owner Margaret Scott aims to give all guests a comfortable, enjoyable and memorable stay.

Check availability and book directly with us for our best prices.﻿

We offer special rates for longer stays. Use the contact page to enquire or email us directly at craigvarbnb@icloud.com

Book now
Availability may not show for some rooms or dates at the moment but please do call or email if you'd like to make an enquiry. We do appreciate your interest.
​​​

"Absolutely one of the best places to stay in Scotland" D. Udewitz 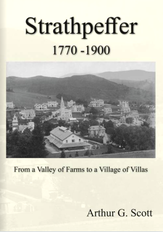 This short extract is from Arthur's new book about the history of Strathpeffer and the surrounding area.

ANDREW CARNEGIE AT STRATHPEFFER.
Mr Carnegie, the great American millionaire, along with a party of ten, arrived from Cluny Castle, and stayed at the Spa Hotel, Strathpeffer, in July 1890.

Cluny Castle, at Laggan, near Newtonmore, was the summer residence of the Carnegie family for ten years until he bought Skibo Castle in 1897.
​
Strathpeffer was one of a number of stops that Andrew Carnegie & Party made on the 1890 tour. It reads a little like a modern-day NC500. Let’s call it the AC500.

“Mr and Mrs Carnegie and their friends greatly enjoyed their tour in the four-in-hand through the Highlands. They drove, in the first instance, from Cluny Castle to Invergloy; then up the valley of the Lochy and the Ness to Drumnadrochit, where they struck off for Strathglass, Beauly, and the West. They passed along by Strathpeffer and Achnasheen to Loch-Maree; thence to Ullapool and Inchnadamph, and back to Lairg. From Lairg they started for Tongue, and went along the north coast of Sutherland and Caithness to Thurso. Their next stage was to Wick and John o’Groats, and they returned along the East coast to Inverness, where they arrived on Thursday evening. The party left Inverness on Friday with the four-in-hand shortly before noon for Cluny Castle, going by way of Daviot and Carr-Bridge.”